I am being asked about standing workstations quite a bit these days.  They seem to be quite popular at the moment, at least in idea with workers, and gaining popularity.  Lots of people are keen to try them but are they really needed, or are they just a whim?  I will try to cover some of these questions in this blog post.  I am referring to both permanent standing workstations, and sit-stand (i.e. up and down options) workstations here – see picture below. 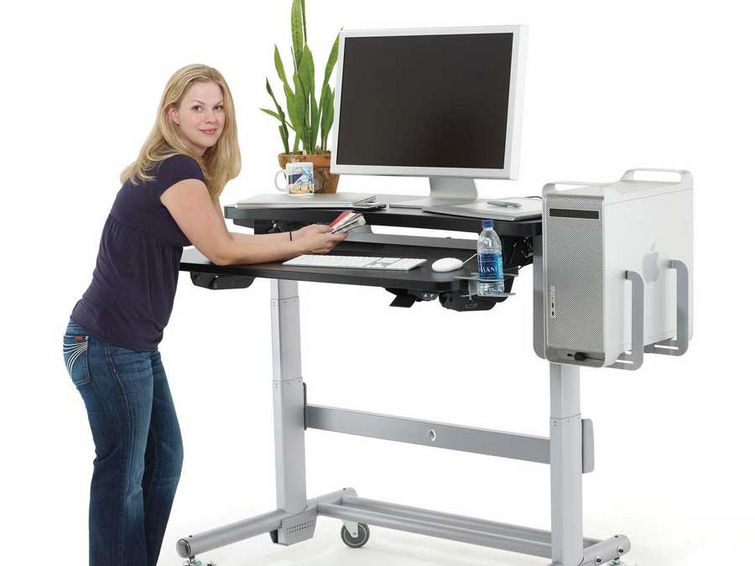 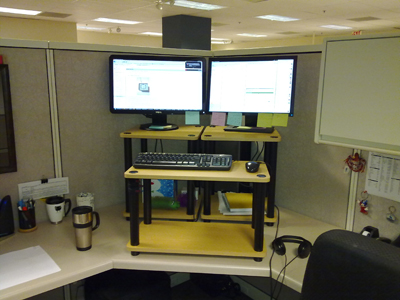 The initial proposed benefit of sit stand workstations was to relieve back pain, any they still may be useful for that.  Since then more evidence has accumulated on the importance of general activity (or lack of) for other areas of health.  Sit stand workstations go some of the way to providing this activity, although they may not actually achieve the light to moderate exercise that is required.  Active workstations (such as treadmill and cycling) do provide this but are a long way from becoming acceptable for most workplaces – more on this later.

Optus and the Heart Foundation have both done some study in this area and have found that standing workstation certainly do appear to be effective at reducing sitting time.  In both studies the participants maintained their use of the workstations, however in the Optus study there was some anecdotal evidence reported that workers appeared to be sitting more once the study was completed.  It is also worth noting that no change in productivity (up or down) was noted in the Optus study.

It appears that there are a number or good points to be made on Sit-stand workstations.  So why don’t we all have them?

Well of course there are a number of issues that are associated with these workstations.  Talking to managers (those that would be responsible for buying them) there are few reservations and rightly so.  First and foremost is the cost.  They are expensive.  Prices are coming down, but even if they do drop close to the price of a standard desk there is still the fact that they are a replacement for an item that was doing the job so far.  There is also no strong evidence of long term use, and a real chance that some employees may use them as a purely seated workstation after the novelty has worn off.

Other potential issues are the fact that they may not be suitable for some workers and actually exacerbate issue like back pain or feet and lower limb issues (this would be unlikely in most scenarios but may be a concern).

I believe that sit-stand workstations need to be a large part of our workplaces in the future, but it remains to be seen if they can become common place and well adopted.  It is suggested that some in some Scandinavian countries the adoption is up to 80% which is encouraging.  It does take some time to change culture though and we don’t want to find ourselves in a situation where we have a pile of standing workstations in the corner of our offices not being used.  So my suggestions are as follows: